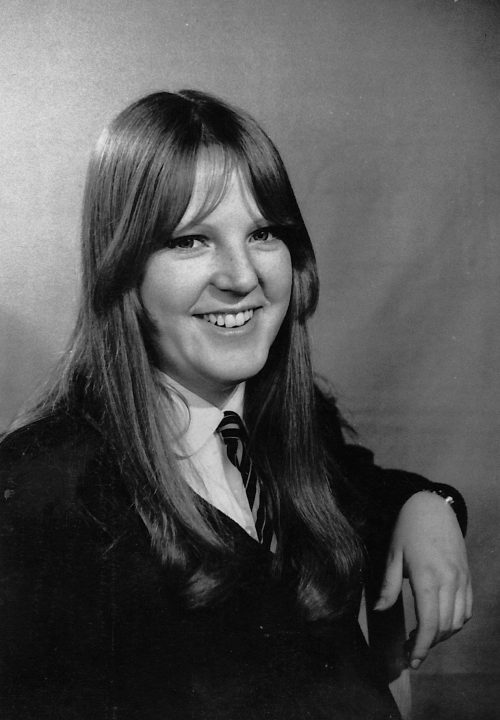 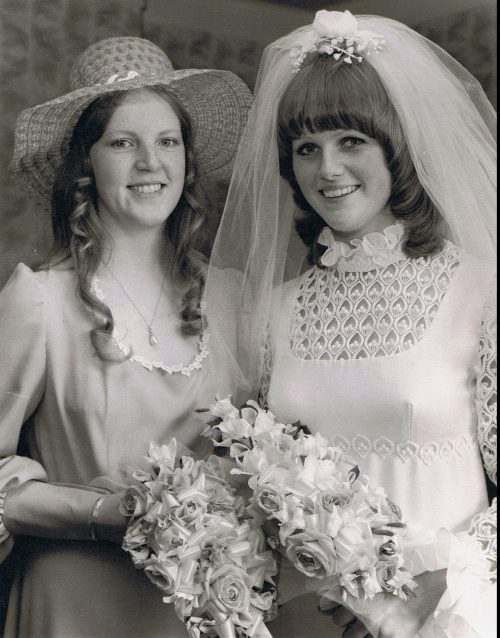 Margaret was born in Glasgow in 1951 to Marion and William Howat.

Attended school at Budhill Primary and Coatbridge High School. She then did one year @ Glasgow University studying Geography but after we married and  moved to

Farnborough, Hampshire completed a course at Kingston College in Cartography.

In her early years she was very active in her local church @ Eastbank now New Shettleston Parish Church – Brownies, Girl Guides, Sunday School and active with clubs within the church.

There was someone special to Margaret in all her years growing up and that was Anne Pryor they actually met at Budhill Primary School in their first year and have remained friends their whole lives almost mirroring events despite residing on different continents.

At school she was an excellent student always gaining high marks in all her subjects but it was badminton that she loved playing for the team in Glasgow competitions.

We met in December 1968 and travelled to Aviemore with my friend John Burford, Anne Pryor, Anne’s Boyfriend Stan Watt and Margaret. A whirlwind came over Margaret and I over the next few days. We did not see each other again till March 1969 exchanging many letters and phone calls. We found out so much about each other over those three months that it was inevitable the we would get married. I got a job with the BBC being posted eventually to White City but we had already decided that September 1970 was to be our wedding day.

We moved back to Glasgow in 1974 just after Steven was born settling in Cayton Gardens. Philip was born in 1975 and Matthew in 1982.

We made our final home move in 1992 to Carrick Drive hence the title of the website.

Margaret was diagnosed with Multiple Sclerosis in 1982 a disease of the nervous system of which there is no known cure. As a young family growing up we were not sure how the disease would progress as information imparted to us at the time was very limited. Sadly we saw a deterioration in Margaret’s condition over time such that first using a simmer frame to walk and finally a wheelchair. It was not long before Margaret was unable to use her hands properly a huge blow as she was very active making things.

The blow to her was even more apparent as she became fully reliant on me for everything in her daily routine.

Despite that realisation that she would be no longer be as independent as she was we were determined to not let MS beat us down and vowed to not let it get in the way of our relationship together. I am not saying it was easy – it was not especially seeing someone so special suffering the way she did.

I hurt my back around the close of 2014 which sadly meant some changes in how I dealt with Margaret such that she had to have suprapubic catheter fitted so that my lifting was minimised. Whilst this was a success in part other problems began to unfold. To put it bluntly as one part of the body is relived of some workings it shows up in other areas that do not function as well such as muscles etc.

Despite everything the one thing was always sharp was her brain power. Using audio books with some complicated stories and many characters she was able to assemble them all. We had many discussions in what was own book club about what she had listened to.

You never know what is about to unfold on life’s path yes you can reflect back and hold on to memories but when that moment comes as it did in January (2016) after taking Margaret to respite at Leuchie House that I would never have her home again in Carrick Drive.

The blow to me and my family was huge beyond words for us to cope with that Margaret was no longer with us to keep us in check and make sure we did things right a better teacher you will never meet.