Well here we are several weeks on.

I have not been able to travel very far at all the same as everybody else in the country. So, in short nothing much has happened in the previous weeks. I have been busy in the garden as the weather at least has been very good for the most part.

I have been collecting the odd picture from my area that shows the extent of the lock down. Check out the gallery.

I had a birthday two weeks ago my 72. It was planned as a full selfie on my own but Matthew and then Steven and the crew appeared separately social distancing observed. It was great the only people I have seen in 8 weeks other than those at the shops.

I did write on the Scottish Parliament website a comment about the lockdown going forward as I would be very annoyed if I am confined to barracks for an indefinite period due to my age. At least I got it off my chest.

As we approach going into the tenth week of the lockdown there might from Thursday 28th May onwards the chance that we will be able to move a bit farther afield and maybe hopefully get swinging the golf clubs.

Update after Thursday –  You may hear the cheers from Scotland 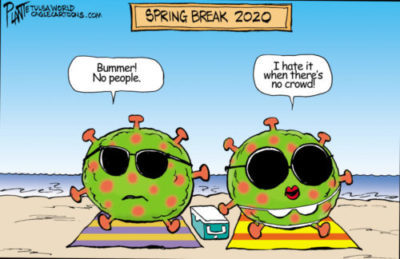 Leading up to the announce on Thursday was not a surprise with the week going well. One trip to Morrison’s on the Monday looking for flour after trying all three shops no flour. Yeast packets arrive courtesy of Jacquei’s mum in Welwyn Garden one loaf made with flour I had. The garden has been keeping me busy all week and over the weekend.

I have a little touch of sciatica due to all the bending etc. Managed to fill the green bin up within 5 minutes of it being emptied by the council refuge collectors.

Thursday evening a clap for the NHS and all the people who are keeping the country in some form of normality but a special thanks to all those who are on the front line wether in hospital or care homes.

Read many stories this week in The Times and on Jeremy Vine radio programme. There were two that brought home to me so many feelings at this time.

On the radio a lady was relating a story of her husband who was in a care home ringing her to ask why she had not been in to see him. A story the lady had difficulty getting her husband to understand that she cannot visit him due to the lockdown. He had dementia and was seeing all the hospital staff coming and going. Such a touching story.

The other was a family writing a sort a blog of their experience during the lockdown. The husband and children were brought into the hospital and were told to say their goodbyes to his wife and children’s mother. The medics view was that she would only survive a few more hours. After a discussion the medics asked if they could try something and the family left or home. A phone call in the morning from the hospital to the family dreading the worse update possible that his wife and the children’s mother had died. The message was such a surprise to them to be told that their mother was on the mend after they had turned her onto her front. A few days later she was home with a lengthy recuperation.

Such a touching story to me as saying goodbye to some one I loved so dearly over three years ago is still raw in my memory.

An article in yesterday’s Sunday Times had a worrying notion to me:-

‘However, ministers warn that the over-70s and those who are particularly vulnerable to the coronavirus will be stuck on a “red” light for months. They will have to wait until there is a vaccine before resuming normal life. This third phase may not be possible until the autumn of next year.’

This is a theory being banded about over a three colour traffic light scheme to end the lockdown.

This would be very concerning to me to be asked to self isolate for over twelve months – no access to family, personal relationships just to name two.

That is in future so I can only hope that it does not come to that.

Palm Sunday service from the manse and uploads to website done by evening on Sunday.

Gardening and tidying the garden is moving apace now with some dry weather. Lawns scarified again with new scarifier and fertilised – replacements ordered fertiliser and grass seed. Plants arrived from Thompson and Morgan – fuchsia and begonias all potted up quickly.

Set about in the midweek to install TP link router to work with Virgin Media router now reconfigured to modem mode. I had been having a problem with VM router dropping out over the last few weeks. It turns out that by coincidence there seems to have been a service issue in the area for a while according to VM engineer I spoke to in the street on the way to shops.

TP link installed and then set about configuring all the devices to cable and Wi-Fi. Found a few issues but with help from Philip managed to get all working again. The one thing I found is that I am using Cat6 cable which meant any RJ45 plugs I made up were faulty, so new crimper and plugs purchased – arrived and now new cables to garage made and working. CCTV cameras all operational again.

A little help from Steven on Sunday re the Synology NAS – more assistance required to configure correctly so that it is seen on all devices MAC’s, PC’s, iPad and iPhone.

Almost at the end of third week taking a moment in the afternoon sunshine and a cuppa surfing the net and came across some sad deaths announced Peter Bonetti the Chelsea goalkeeper had passed away. I remember seeing him many times playing for Chelsea and England. Stirling Moss had also passed away although I never saw him race on television, he was a name that epitomised the skill in his sport at a time of open car racing.

Finally, before calling it a day I listened to the Queen’s audio message I found it so uplifting on this Easter Sunday as I did with our Sandyhills Easter Day service from the manse this morning.

We now await as we go into week 4 whether restrictions are going to change, I suspect not.

Here’s to next week

Getting use to the restrictions at the start of the week. The church service yesterday came from the manse streamed live on YouTube. I followed this by doing an audio download and editing the service for Podcast and website upload.

The usual gardening etc around the Abbott estate taking advantage of the good weather when I can, the greenhouse and propagators are full.

Disaster stuck on Tuesday when the oven decided to break down right in the middle of cooking honey roast ham with 1.5 hrs to go. Looked up on AO.com and was fully prepared to buy a new oven. A call to my friend Walter managed to source a new element and back working again later in the afternoon. Then to cap a day of breakdowns the lawn scarifier decides to give up on me. Sorted new one on order.

The part that I find the hardest to get to grips with is no golf or bowls which I enjoy interacting with others in sport. I have contact with the grandchildren and their families as well other friends by phone and text, but it does not make up for personal contact.

It is just over 10 years that I have been running this blog. I started in 2009 when the snow came to Glasgow in December to keep contact with the boys.

We are just one week into a lockdown in the whole of the UK due to Covid-19 pandemic so it seems appropriate to keep a note of my self-isolation routine as the weeks develop.

I find the pandemic quite scary to contemplate the conditions that are slowly unfolding around the UK and the whole world. There are so many issues that we are being asked to cope with especially as history shows that the UK was not shut down to this extent during WW2.

I was on holiday via Singapore to Australia from January 13 to February 19. The only time we saw anything relating to testing was on arrival at Singapore Airport. There was temperature taken and all the airline staff were wearing masks. We went to the Australian Open tennis with over 800000 spectators and nothing re isolation etc. Obviously, we were being informed re the situation in Wuhan, China via the internet. It had not reached the level it is now, but I believe somebody knew something on January 13 hence the precautions in Singapore.

So, one week has now gone very quickly only been past the gate twice to the shops and a couple of walks in our little park across the road. I have been busy in the garden getting ground dug ready for potatoes and other produce. Spent a few hours in the greenhouse getting beans started, Broccoli, cauliflower and herbs. Tomato started in the propagator in the garage. Spent the last couple of days thinning bamboo but not able to get the debris to the tip as it is closed and no brown bin pickups now due to restrictions.

On Sunday 22 March I set up a live stream of the church service from Sandyhills church. This was put together over three days with a lot of cameras and cables from my hoard of bits at home. On the whole it was quite successful, but the lighting was not as good as it should be, and the main camera was not of sufficient quality. I recorded the service on my cameras and did an edit and uploaded to YouTube by the midweek.  The service is now being done the minister from the manse as I am taking self-isolation seriously.

So, one week down will update in a week’s time.